In the days before social media and instant online news, the newspaper served as a vital community link and source of not only news, but entertainment, advertisements, and more.  The earliest Colorado newspapers even posted alerts for persons who had mail to pick up at the post office, or snippets on who was traveling where, and even gossip — the social media of the 1860s!

Newspapers were so important to Colorado — and throughout the U.S. — that even the smallest towns had papers (often reprinting stories from the bigger city papers), and newspapers were printed in dozens of languages for all different ethnic groups.

Even with the development of radio, then television, and then online news, printed newspapers continued to be published and are still surviving today.  Denver’s first newspaper, the Rocky Mountain News, closed two months short of its 150th anniversary.  In the 1890s, Denver had four major dailies.  Of these, only The Denver Post survives.  Throughout the 20th century the rivalry between the News and the Post was a major part of the culture of Denver.  Several great books have been written about the two papers and their antics, including volumes by Gene Fowler, Robert Perkins, and Bill Hosakawa.  One of the books that has been written about the Post is Voice of Empire:  A Centennial Sketch of The Denver Post, by William Hornby. It was published by the Colorado Historical Society and is available for checkout from our library.

The Historical Society’s magazine, Colorado Heritage, has also published several interesting articles on Colorado newspapers (or incidents involving newspapers), including “The Annoying Gene Cervi: A Terror of Colorado Journalism,” by Lee Olson, in the Spring 2000 issue; “The Day Little Miracle Died,” by Dick Kreck, in the Summer 1998 issue; “Growing Up Together:  LoDo and Westword,” by Clark Secrest, in the Winter 1998 issue; and “Bloody August:  The Denver Tramway Strike of 1920,” by Stephen J. Leonard, in the Summer 1995 issue.  All issues of Colorado Heritage are available for checkout from our library.

If your interest is the Western Slope rather than Denver, be sure to see Historical Sketches of Early Gunnison, published in 1916, which includes a chapter on “The Newspapers of Gunnison.”

Are you interested in reading the actual newspapers themselves, not just reading about them?  Then head over to the Colorado Historic Newspapers Collection (CHNC) where you can search through more than 880,000 digitized pages from 200 Colorado papers published between 1859 and 1923.  A service of the Colorado State Library, CHNC is a valuable tool for both researchers and history enthusiasts.

Since Colorado did have so many different newspapers, it can be difficult to know where to start.  A helpful guide is Colorado Newspapers:  A History & Inventory, 1859-2000 published by the Center for Colorado and the West at the Auraria Library and available for checkout from the State Publications Library. 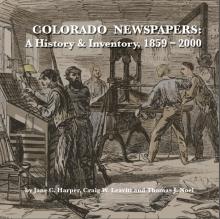