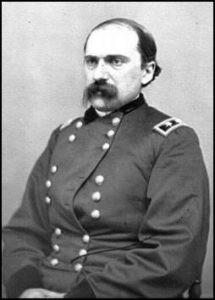 Edward Moody McCook served two non-consecutive terms as territorial governor.  Originally from Ohio, McCook had come to Colorado during the 1859 Gold Rush.  He settled in Central City and set up a successful law practice.  He returned east to serve in the Union Army during the Civil War, attaining the rank of Brigadier General.  McCook received his promotion for gallantry at the battle of Chickamauga.  As General he commanded cavalry during Sherman’s March to Atlanta, and then moved south through Alabama to Florida, where he accepted the surrender of Florida and served a short time as Military Governor.  It was during McCook’s service in the Union Army that he got to know Ulysses Grant.

Following the war, McCook’s acquaintance with Grant first earned him the appointment to the post of Territorial Governor of Colorado in 1869, which came after an appointment by President Johnson as U.S. Minister to Hawaii.  Grant removed Colorado Territory’s preceding governor, Alexander Cameron Hunt, from office to appoint McCook in his place.  This did nothing to endear McCook to Coloradans, who had generally liked Governor Hunt.  In 1873 citizens put forth a petition to remove the unpopular McCook from office, and he was replaced by Samuel Elbert, son-in-law of former Territorial Governor John Evans.  (For more on the rivalry between McCook and Elbert, see this article from Colorado Magazine). After serving just one year, the popular Elbert was removed from office and McCook was reinstated.

Despite his lack of popularity, McCook’s governorship proved quite productive.  He was instrumental in developing Colorado’s public school system, and both the Colorado School of Mines and the Colorado School for the Deaf and the Blind were created under his watch.  McCook prioritized funding for public schools, and created the position of Superintendent of Public Instruction.  (You can read the Superintendent’s biennial reports online courtesy of our library).  W.C. Lothrop was the first person to serve in that position; today it is known as the Commissioner of Education.  McCook also established a Board of Immigration to promote Colorado, and was an early advocate of women’s suffrage.

The Colorado State Archives writes that during McCook’s second term, “political upheaval, grasshopper infestations that destroyed Colorado crops, and numerous mining disputes created an atmosphere of tension in his administration.”  Therefore he was again removed from office, this time after only serving nine months.  During the remainder of his career McCook invested in mining, railroads, and telephones.  He died in Chicago in 1909 and is buried in his hometown of Steubenville, Ohio.