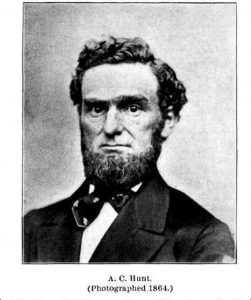 Colorado’s fourth territorial governor, Republican Alexander Hunt, was appointed to lead the territory on April 24, 1867.  Hunt had grown up in Freeport, Illinois, where he eventually served as mayor.  Lured by the California Gold Rush in 1850, Hunt stayed in California until a new gold discovery was made in Colorado in 1858.  Relocating to the new territory, Hunt became judge of the territory’s Vigilante Committee, which used hangings to deter mobs and desperadoes from terrorizing Colorado prospectors.  Hunt also served as a US Marshal for Colorado as well as Ex-Officio Superintendent of Indian Affairs.  Hunt ran for a seat as a territorial delegate to Congress but lost the race; soon after he was appointed territorial governor.

The influx of settlers in Colorado Territory led to increasing unrest among the Plains Indians tribes during this time period, and soon the Utes from the Colorado mountains joined the plains tribes to resist the white settlers.  To address the situation Hunt brought together Ute chiefs, Indian agents, and federal officials to negotiate a peace treaty in 1868.  This did not solve the situation, however, because the US did not keep its promises of supplying food and supplies, further adding to the tribes’ discontent.  It would be up to later governors to continue negotiations with the tribes.

Governor Hunt was relieved of duty in 1869 because President Grant wanted to appoint a friend, Edward McCook, to the post.  Governor Hunt continued to live in Colorado, however, becoming involved with agriculture and railroad development.  He died in 1894.

Several articles about Hunt are available from our library in the Colorado Magazine, including

Also be sure to search Colorado’s Historic Newspapers Collection for articles about Governor Hunt and his family.