The first decades of the twentieth century were the height of the wilderness movement in the United States.  Following the popularity of Yellowstone National Park, established in 1872, and Frederick Jackson Turner’s 1893 declaration that the American frontier was closed, Americans gained a new interest in protecting wilderness areas, as well as exploring the past through archaeology.  During his presidency, Theodore Roosevelt championed wilderness preservation, and the 1906 Antiquities Act gave presidents the authority to designate national monuments without an act of Congress.  Thomas Patterson, one of Colorado’s US Senators at the time, was among the sponsors of the Antiquities Act.  Many National Parks and Monuments, such as the Grand Canyon, were designated during the 1900s and 1910s, and in 1916, Woodrow Wilson signed the bill creating the National Park Service.

During this time, Arthur Carhart was championing wilderness preservation.  Born in Iowa in 1892, Carhart was hired as a landscape architect with the US Forest Service in 1919.  He was given the assignment of surveying and planning development at Trapper’s Lake, in Colorado’s White River National Forest.  As a result of his survey, Carhart urged the Forest Service to preserve the Trapper’s Lake area for recreational use, rather than develop it.  The Forest Service agreed with his recommendation, and the area was designated to be kept roadless and undeveloped, a state which continues to this day. 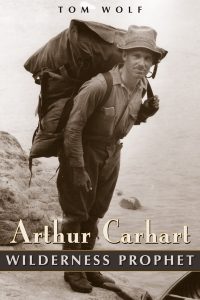 That same year Carhart issued a memorandum to forester Aldo Leopold urging that significant and scenic places remain wilderness:  “there is a limit to the mountainous areas of the world, and…there are portions of natural scenic beauty…which of a right should be the property of all people.”  Leopold was inspired by Carhart to do his own part to help protect America’s undeveloped scenic lands.

Although Carhart only worked for the Forest Service for four years, from 1919 to 1923, when he went into private practice as a landscape architect, he left an incredible legacy in advocating for the preservation of wild and scenic lands.  Today Carhart is recognized as one of the fathers of wilderness preservation in the United States.  Arthur Carhart:  Wilderness Prophet, by Tom Wolf, explores the life and legacy of Carhart and his contributions to the wilderness concept in Colorado and the United States.

For additional resources on the wilderness movement, see the following publications from our library collection: