The Friday Grab Bag is a weekly series that highlights fun, unique, and interesting happenings in Colorado libraries, and includes news from the Colorado State Library.

Aurora Public Library launched their 3rd Annual Craft Brews Tour, an opportunity to explore the city’s vibrant brewery scene. The event, which runs from May 1 to October 31, includes a brewery passport, special events hosted at breweries, and chances to win prizes.

Explore downtown Salida with the Salida Regional Library’s Digital Walking Tour. The experience uses images from their digital archive that are geolocated on a map of the town, offering users the ability to make comparisons between historic and present-day landmarks.

High Plains Library District invites community members to Ask Me Anything About Race, a moderated panel discussion on June 6 at 6:00 pm at Riverside Library and Cultural Center.

Basalt Regional Library’s Philosophy Club invites you to Talk About Music at their next meeting on June 5 at 5:30. Members should bring a piece of music (any genre or artist) to discuss with their fellow philosophers.

Residents of Grand County have three opportunities to learn about pesky, noxious weeds and how to prevent them. Grand County Public Library is partnering with the CSU Extension Office to offer classes on June 5 at Fraser Valley Library, June 14 at Granby Library, and June 27 at Juniper Library.

Dolores Public Library announced their Summer on the River series, free concerts and outdoor movies on Wednesdays in June and July. Bring your dancing shoes and get ready to enjoy live music and music-themed movies.

Libraries in the News

Congratulations to the Colorado Talking Book Library, named Network Library of the Year by the National Library Service for the Blind and Physically Handicapped. CTBL Director Debbi MacLeod and State Librarian Gene Hainer received the award last week at the Library of Congress. Read the CDE news release.

The Journal-Advocate covered a presentation by Erica Kallsen, librarian at Sterling Public Library, who demonstrated how to use the library’s OverDrive subscription. Read the story.

Pueblo City-County Library and the Children’s Museum of Denver were two of the ten recipients of the 2018 National Medal for Museum and Library Service, the nation’s highest honor given to libraries and museums that make significant and exceptional contributions to their communities. The awards were presented on May 24 in Washington, D.C.

Durango Public Library has been designated a Patent and Trademark Resource Center (PTRC), the second such center in Colorado. From the U.S. Patent and Trademark Office announcement: “The library will support entrepreneurs throughout the region seeking patent and trademark protection for their intellectual property. USPTO-trained librarians will assist patrons using the agency’s patent and trademark databases.” Read more in The Durango Herald.

The Wyoming State Library produces a monthly calendar of free education opportunities. Check out the events for May 2018.

Looking for Colorado professional learning events? The Library Learning & Creation Center has a calendar of opportunities. 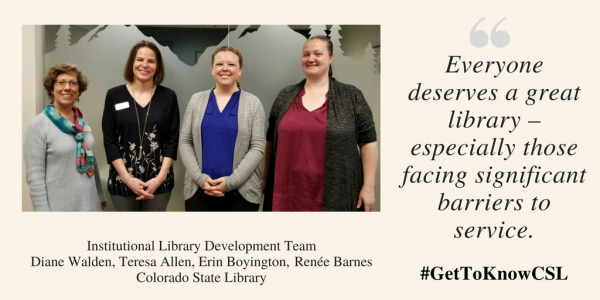