In the 1870s, Colorado was very much the wild west and the thriving, growing hub of Denver was full of all kinds of “vice”– saloons, opium dens, outlaws and Market St primarily marketed

Denver’s floosies. The young men growing up in Denver did not have a respectable establishment to hang in. This needed to be remedied.[footnote]“A Library and a Reading Room.” Rocky Mountain News, August 18, 1872. CHNC [/footnote] 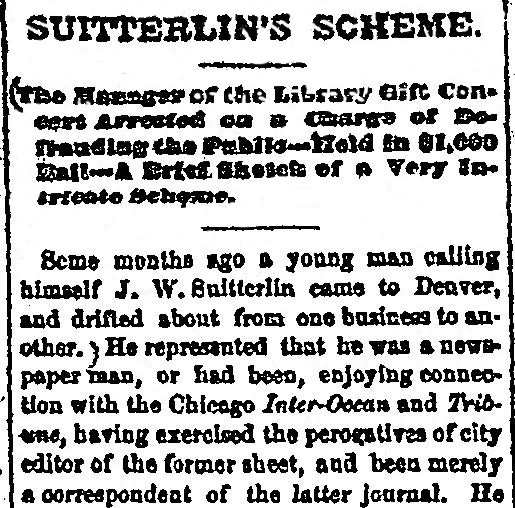 About a year later, a charlatan named J.W. Suitterlin proposed building a public library and reading room. He just needed the funds. And he had a ruse to obtain them.[footnote]“Grand Gift Concert.”  Rocky Mountain News, July 4, 1873. CHNC [/footnote]

However, Suitterlin (if that was his real name…) had swindled the fine, upstanding, morally contentious folks of Denver. He had no plans to build a library for the poor, overly tempted young men of Denver; he had plans to keep all the money for himself. All $80,000. Suitterlin didn’t make it out of the state quickly enough and was arrested mid-September and held on a $1000 bail.

By later November he was convicted and sentenced to jail for eighteen months.[footnote]“City and Vicinity.” Rocky Mountain News, November 21, 1873. CHNC[/footnote]

Denver eventually had a small library established in the high school beginning in 1889. In 1910, it received funding from Andrew Carneige for its own building in downtown Denver.

The Colorado Historic Newspaper collection never ceases to amaze with its first hand accounts of wild west shenanigans! In fact, RMPBS’ Colorado Experience has an episode all about lack of morally upstanding individuals in Colorado’s history!