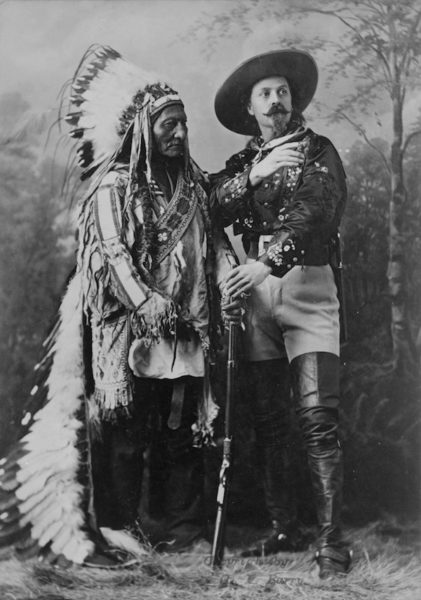 Where: Born in Iowa, traveled the western United States, and died in Denver.

Why Important: Buffalo Bill was an American soldier, bison hunter, and showman

William F. Cody was born in Iowa on February 26, 1846. At the age of eleven, Cody left home to herd cattle. He also worked as a driver on a wagon train. Later, Cody tried his hand at fur trapping and mining. In 1860 he rode for the Pony Express. The average rider covered 75 to 100 miles per day. Cody once rode 322 miles between stations on the North Platte River. This was the third longest ride for the Pony Express. He was just fifteen at the time.

Cody enlisted in the U.S. Army in 1864. He served with the Seventh Kansas Volunteer Cavalry during the Civil War. He took part in a winning fight against one of the South’s greatest commanders, General Nathan Bedford Forrest.

After the war, Cody earned the nickname “Buffalo Bill” because he supplied buffalo meat to the Kansas Pacific Railroad. Mounted on a steed named Brigham, Cody shot twelve buffalo per day.

Later, Cody rejoined the U.S. Army as a scout. He worked for seven expeditions and fought in nine battles. This was more than any other soldier or scout in the U.S. Army. In 1869, while scouting for the Fifth Cavalry, Cody tracked a group of Cheyenne warriors.[footnote]“The Indian Campaign.” Rocky Mountain News, March 9, 1869. CHNC[/footnote] He found them on the grassy plains near present-day Sterling, Colorado. During the battle, Cody is said to have shot the great Cheyenne chief, Tall Bull. This conflict ended the Indian Wars on Colorado’s eastern plains.

In 1872 Cody performed in a show called “Scouts of the Prairie.” For the next decade he performed in a variety of plays with his own theater troupe. Then, in 1882 Cody started his famed Wild West Show.[footnote]“Colorado Briefs.” Eagle Valley Enterprise, August 29, 1902. CHNC[/footnote] It was an outdoor show. The show included real Indians, cowboys, buffalo, horses, and elk. Many shows dramatized scenes from Cody’s own life. With each performance the legend of Buffalo Bill grew. Cody introduced each Wild West show with the words, “LADIES AND GENTLEMEN, MAY I PRESENT TO YOU THE CONGRESS OF THE ROUGH RIDERS OF THE WORLD!”

Cody fell behind on loan payments and was forced to end his Wild West Show. While visiting his sister, Cody died in Denver in 1917.[footnote] “State Will Honor colonel Cody.” Carbonate Chronicle, January 15, 1917. CHNC[/footnote] He is buried on Lookout Mountain in Golden, Colorado.