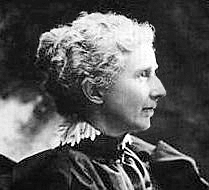 Where: Born in Illinois, she moved to Boulder, Colorado, in 1878

Why Important: She was one of, if not the first woman faculty member at a state university

In 1878, in the first year of the newly founded University of Colorado in Boulder, a most important event took place. Mary Rippon arrived to teach English grammar, French and German languages and give instruction in mathematics. She was one of the first women to gain a place on the faculty of a university.[footnote]“University of Colorado.” Colorado Springs Gazette, September 21, 1878. CHNC [/footnote]

President Sewall[footnote]“Influence.” Boulder News and Courier, January 9, 1880. CHNC [/footnote] had first invited Mary Rippon to teach at the University the preceding summer. But she declined on the basis she had previously accepted a contract to teach in a Detroit high school. The decision to come west was not an easy one. Rippon had followed her high school education with five years of study abroad in Switzerland and Germany. While teaching in Detroit, she was warned by a minister who had just returned from Boulder that the University of Colorado consisted of a single building located “way out on the prairie and this one building would soon fall down and kill all within it.” The appearance in the “Atlantic Monthly” of Helen Hunt Jackson’s article on the Colorado wild flowers and repeated invitations from Dr. Sewall persuaded her to change her mind.

Rippon traveled by train from Detroit to Cheyenne, Wyoming, and then down to Boulder. She recalled her arrival as follows:

“I was almost alone in the Pullman when the train stopped. Dr. Sewall was there to meet me. The daylight had faded but a new moon cast enough light to show up the wonderful line of the snow clad mountains. The air was that of a perfect January evening, clear, dry and bracing. One of the first questions Dr. Sewall asked me was “How does it look to you?” With eyes turned to the silhouette at the west, and thoughts of the Alps, my one word was “glorious.” The genial Doctor relaxed at once as he remarked, “Well, my spirits have risen a hundred percent. My wife had told me you would not stay two days in this lonely place.”

Rippon stayed for more than two days; she became head of Germanic languages and literature until her retirement 31 years later.[footnote]“State University Loses Miss Rippon.” Weekly Courier, July 21, 1909. CHNC [/footnote] Upon her death in 1935, the Regents of the university approved plans for an outdoor theater to be built in Mary Rippon’s honor. That theater is still in use today.