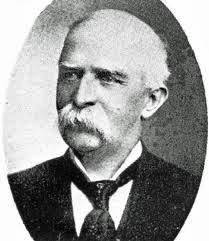 Where: Black Hawk and Denver, CO

Why Important: Heiser was an important businessperson and entrepreneur in Colorado. He created the famous H.H.H. saddles known for their high quality and craftsmanship.

Hermann Heiser was born in Germany on June 29, 1836. Believing that there were few opportunities for him there, he emigrated to the United States in 1854.

After staying in New York for a short time, Heiser moved to Wisconsin where he learned to speak English and began perfecting his saddle making trade. He opened his first saddle and harness shop in the city of Highland, Wisconsin. Heiser quickly gained a reputation for working hard and making excellent saddles. Unfortunately, he also began to have health issues. Heiser’s doctor recommended that he move to a higher elevation for his health. So, in 1863 Heiser and a friend decided to move to the mile high city of Denver, Colorado.

Heiser arrived in Denver on December 22, 1863. After staying in Denver during the winter, he moved to Black Hawk where he and another saddle maker opened a shop. The shop did well, and a year later, they opened a second store in Central City.[footnote]Daily Mining Journal, October 31, 1866. CHNC [/footnote] Heiser’s reputation as a superior leather man spread and people began to seek out his saddles. The shops also sold other goods such as gun leather, cowboy accessories, and harnesses.

On May 20, 1874 Heiser bought a saddlery on Blake Street in downtown Denver and named it the “The Hermann H. Heiser Saddlery Company.”[footnote]Denver Daily Times, July 10, 1874. CHNC [/footnote] His business continued to grow and in 1878 he registered his Triple ‘H’ trademark. It was the ninth registered trademark in Colorado. By the 1900s, The Hermann H. Heiser Company was known around the world.

Heiser met and married his wife, Mathilde, in 1877. The couple had four boys and in 1904 Heiser’s oldest son, John, took over the business. Hermann Heiser died on September 12, 1904 while visiting his sister in Germany at the age of sixty-eight. Heiser’s sons held a family meeting and decided they wanted to keep running the family business. The brothers helped the store continue to grow. By 1917 The Hermann H. Heiser Company was the largest manufacturer of saddlery goods in the West. The company remained a family business for eighty-seven years.[footnote]Steamboat Pilot, April 27, 1950. CHNC [/footnote]