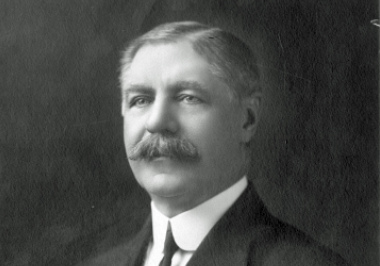 Where: Born in Germany and moved first to Wyoming, then to Denver

One of Colorado’s most successful early businessmen, Charles Boettcher (pronounced Bet- cher) left Germany for the United States in 1869. He was 17 years old. In America, Charles traveled to Wyoming where his older brother, Herman, worked in a hardware store. Charles got a job in the same store and worked alongside his brother, making two dollars a week.

Eventually, Herman bought the store and left it to Charles to run. Herman wanted to move to Colorado and open up another store. Soon the brothers owned a chain of several stores in Colorado.[footnote]Aspen Daily Times, February 9, 1888. CHNC.[/footnote] They made money selling hardware and mining equipment to the many miners who hoped to strike it rich in the Colorado mountains.

In 1874, Charles married Fannie Augusta Cowan, and they had two children, Claude and Ruth. Claude followed his father as a successful businessman, and Ruth was known throughout Denver as a great beauty.[footnote]“Little Colorado Items.” Wet Mountain Tribune, October 18,1912. CHNC[/footnote]

Not content with just owning hardware stores, Boettcher started a number of manufacturing businesses. In Leadville, Colorado, he started a business manufacturing blasting powder, needed for blasting away parts of mountains to build mines and tunnels. Later, he started an electric company and then the Ideal Cement Company, one of the businesses he is most known for. Moving to Denver, Boettcher also made money in real estate and in ranching. Then he became interested in sugar beets. Once, when he and Fannie were visiting Europe, he noticed what a good crop they were. He and Fannie brought beet seeds back to America in their luggage. These seeds were the beginning of what would become Great Western Sugar.[footnote]“Charles Boettcher Hurt While Speeding Auto.” Loveland Reporter, July 13, 1917.CHNC[/footnote]

Charles Boettcher died in 1948.[footnote]“Commenting On Current Events.” Steamboat Pilot, July 8, 1948. CHNC[/footnote] The Boettchers were so wealthy that a philanthropic foundation was started in their name. The Boettcher Foundation, which still exists today, has contributed to many important cultural attractions in Denver, including Boettcher Concert Hall and the Denver Botanic Gardens.