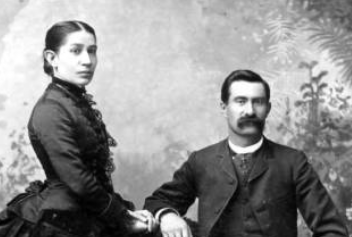 Where: Moved from New Mexico to Trinidad, and then to Barela, Colorado

Why Important: Barela served as a territorial legislator, helped write the  Colorado Constitution, and represented Colorado as a senator for thirty-seven years

Casimiro was born in New Mexico in 1847. It was still part of Mexico at  that time. One year later, at the end of the U.S.-Mexican War (1846-1848),  New Mexico became a part of the United States. In 1867, Casimiro moved to  Trinidad, Colorado. He published newspapers and raised sheep, cattle, and  horses. He married Josefita Ortiz and they lived on his ranch.

Casimiro was elected Justice of the Peace in Trinidad when he was just  twenty-two. He later served as County Assessor, Territory Representative,[footnote]“The Tenth Colorado Legislature.” Las Animas Leader, January 9, 1874. CHNC [/footnote] and County Sheriff for Las Animas. He also ran a blacksmith shop, a supply shop, and became postmaster. The town loved him so much that they renamed  the town Barela, Colorado!

In 1875, Casimiro helped to write Colorado’s State Constitution. He fought to ensure that the constitution was published in English, Spanish, and German, making him a hero to many. He became a senator in 1876.[footnote]“City and Vicinity.” Colorado Daily Chieftain, September 19, 1876. CHNC [/footnote] Even though he was successful, Barela’s life in Trinidad was not always  happy. He and Josefita had nine children, but only Leonor, Juana, and Sofia lived. Then in 1883, Josefita died. Casimiro married Damiani Rivera and they  adopted three children.

Later, Casimiro attended the inauguration of Mexico’s President Obregon in 1920. Barela died later that year from pneumonia. Casimiro’s image is one of sixteen stained glass portraits hanging inside the Colorado State Capitol in Denver.