Where: Raised in Virginia and settled in Denver, Colorado 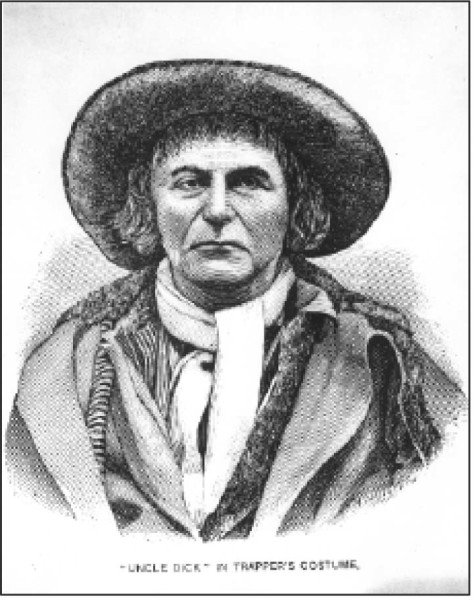 Why Important: Wootton was a guide, a rancher, a farmer, and a storekeeper. He also operated a toll road.

In 1836, Richens Lacy Wootton left his home in Mecklenburg County,Virginia. Itching for adventure he headed west. Wootton found work as a hunter at Bent’s Fort on the Arkansas River. He also drove a supply train to trade with the Sioux Indians. The wagons were loaded with blankets, beads, trinkets, hunting knives, guns, gunpowder, and bullets. They also carried coffee, sugar, and flour. Wootton traded all these things for buffalo hides, buckskins, and ponies.

Wootton moved his family from Taos, New Mexico, to a settlement near Pueblo on the Arkansas River in 1853. He built his new home as a stockade to protect against the local Ute Indians. Wootton found new employment by hauling supplies once more.

In 1858, Wootton loaded his family and trade goods onto a wagon and moved once again. He headed to Kentucky to visit his family. On the way, he stopped in Denver City and Auraria. Wootton broke open two barrels of “Taos Lightning” whiskey. He offered it free to any takers. By the end of the evening, he was so popular with the locals he had earned the nickname “Uncle Dick.”[footnote]“Early Days in Jefferson.” Rocky Mountain News Weekly, February 1, 1860. CHNC [/footnote] The people of the town talked him into staying. Wootton opened a general store. He and his family lived in Denver until 1861.

Later, Wootton moved to Trinidad, Colorado.[footnote]Rocky Mountain News, February 6, 1866. CHNC [/footnote] He built a toll road over Raton Pass. It was April of 1865 when he opened the twenty-seven mile road from Trinidad to Willow Springs, New Mexico.[footnote]“New Bridge.” Colorado Weekly Chieftain, March 2, 1871. CHNC [/footnote] The Atchison, Topeka, & Santa Fe Railway offered him $50,000 to buy the road in 1878.[footnote]“Trinidad and El Moro.” Colorado Weekly Chieftain, August 15, 1878. CHNC [/footnote] He turned them down. Instead, Wootton asked that the railroad give his wife groceries and a pass to ride the train for life. They agreed and signed the deal with a handshake.

Wotton died at the age of seventy-seven in 1893.[footnote]“News Notes.” Fort Collins Courier, September 7, 1893. CHNC [/footnote] True to their word, the Santa Fe Railroad officials took good care of his wife. They made sure she had groceries and a free ride on the train whenever she wanted until her death forty-two years later.