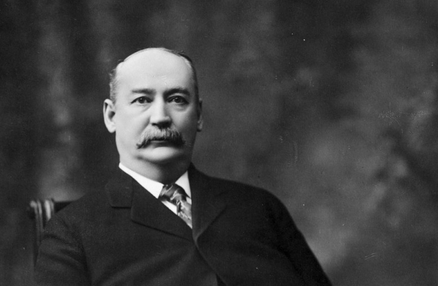 David Halliday Moffat was born in Washingtonville, N.Y. on July 22, 1839. When David was only twelve years old he moved to New York City and became a messenger boy for a bank. He worked so hard that the president of the bank noticed him and gave him the job of assistant teller. David’s older brother Samuel moved to Iowa in 1855 and David soon followed, getting a job at a bank there.

Banking was not David’s only interest. He was enthusiastic about railroad transportation in Colorado and co-owned nine railroads.[footnote] ” State News.”  Silver Cliff Rustler,  September 6, 1888.  CHNC [/footnote] He was also very interested in the mines of Colorado and had over 100 claims.[footnote] “Mines and Miners.”  Aspen Daily Times,  March 8, 1887.  CHNC [/footnote] Success in both these interests made David very wealthy.

David wanted to build a railroad through the mountains from Denver to Salt Lake City, Utah. He began to build the railroad in December 1902, which had 33 short tunnels and it went from Denver to Craig, CO. It was called the “Moffat Road.”[footnote] “Completion of Its Own Line into the Denver Depot.”  Summit County Journal,  April 7, 1906.  CHNC [/footnote] He spent millions of his own money to pay for the railroad. When he started running out of funds, he went to New York City to try to find people who would be willing to help pay for the railroad through the Rocky Mountains. Unfortunately, David became ill while in New York City and died on March 18, 1911.[footnote] “David Moffat is Dead.”  Daily Journal,  March 18, 1911.  CHNC [/footnote]

Since David died, there was no money to tunnel through the Rocky Mountains; however the goal of the tunnel was not forgotten. After several years of trying to raise the money, the Colorado Senate in 1922 voted to pay for the tunnel.[footnote] “Moffat Bill Passed with Four Against.”  Daily Journal,  April 22, 1922.  CHNC [/footnote] It was finished six years later and the first train went through the new tunnel on February 26, 1928.[footnote] “First Train Thru Tunnel.”  Steamboat Pilot,  February 24, 1928.  CHNC [/footnote] It was named the “Moffat Tunnel” after David.