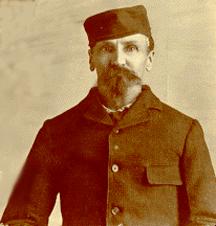 Like thousands of other men of his time, Alferd (sometimes spelled Alfred) Packer caught “gold fever” and sought to make his fortune in the mountains of Colorado. During the winter of 1873-74, Packer joined a group of five other men, whose names were Shannon Bell, James Humphrey, Frank Miller, George Noon, and Israel Swan. The men had met Chief Ouray, who told them to postpone their journey until spring, but the men ignored the Chief’s advice. In February, the six men ran out of food. Alone in the wilderness and trapped in heavy snows, the men soon resorted to boiling their moccasins for food. After a few days, even that ran out. According to Packer, the men became so hungry that one night, Bell came after Packer with a hatchet. Packer turned on Bell and killed him. Packer claimed that he then found the bodies of his other companions and that the flesh had been torn from one of them. That is when, Packer said, he was forced to eat the meat of the other men, or otherwise starve to death.

That spring, Alferd Packer stumbled out of the mountains to a nearby Indian agency, where he told his story [footnote]“Cannibal Packer (part one).” Saguache Chronicle, March 23, 1883. CHNC[/footnote]  [footnote]“Cannibal Packer (part 2)”[/footnote] [footnote]“Cannibal Packer (part 3)”[/footnote]. People didn’t believe, though, that he hadn’t killed all the men. In April Packer was tried in court, where he was unable to prove that he had not killed the men, except for Bell, which he claimed was self-defense. He was sentenced to jail in the town of Saguache[footnote]“A Cannibal Convicted of Murder.” Castle Rock Journal, April 25, 1883. CHNC.[/footnote] , but soon escaped. He was not found until nine years later, when he was living in Wyoming under the name of John Schwartze. He was given a new trial in Lake City, near the site of the killings, and was sentenced to 40 years in the State Penitentiary in Cañon City. He served fifteen years and was then released on parole. After his parole, Packer moved to Denver and worked hard to clear his name. He died in 1907. In 1980, a judge named Ervan F. Kushner tried to get Packer pardoned posthumously, but was again unsuccessful. Packer is buried in Littleton, Colorado.