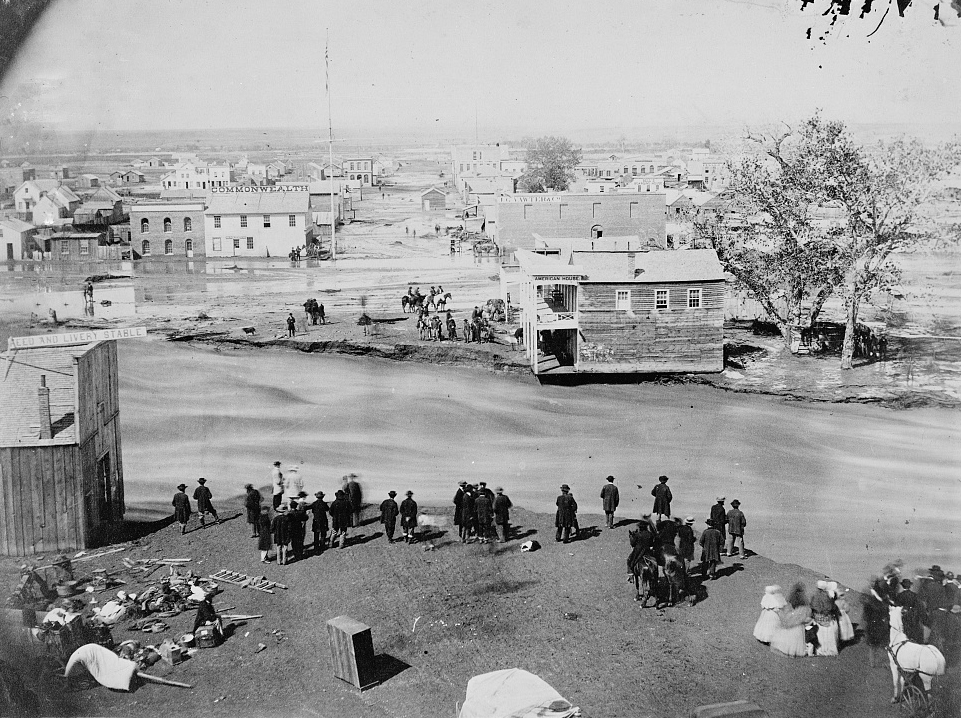 “I looked out of the window and saw a wall of water six feet high rushing down the dry creek bed at terrific speed. Before we could escape from the building, the flood waters reached an embankment connecting the plant with some high shores of the creek. In a few seconds we were completely isolated, with raging water surrounding the building.” -Nathan A. Baker[footnote]Tom Noel quoting  The Rocky Mountain News: The First Hundred Years by Perkins, Robert[/footnote]

On this day, May 19, in 1864 the Cherry Creek massively flooded in the wee hours of the night.[footnote]“The Great Flood in Denver.” Daily Mining Journal, May 23, 1864 [/footnote] Prior to this date, Cherry Creek had been a very dry creek bed for many years. Despite warnings from Chief Little Raven that building on the creek bed was foolish due to the potential for flash floods, as had happened in the past,  the settlers developed in the area, including the building that the Rocky Mountain News was housed in.

Therefore, the incredible, thundering sound of the water rushing into Denver and Auraria blindsided the residents of the area. Many barely made it out of houses or buildings before the structures were swept away. In fact, five members of the  Rocky Mountain News staff were sleeping in the building when it was indeed swept away. They managed to climb through windows and swim to shore. For four to five hours the flood grew, particularly where Cherry Creek met the Platte and thus spilled over into Denver flooding additional buildings with one to five feet of water. Not only were buildings swept away, but also livestock and tragically, fifteen to twenty people lost their lives.

As with any natural disaster, there were stories of extraordinary rescues and unfathomable survival. One such story was that of Mrs. Smith and her five children. “A negro named Smith, with his wife and five children were carried away, but through the heroic management and cool courage of Mrs. Smith, the entire family were saved. All honor to that brave hearted woman!” [footnote]”The Great Flood in Denver.” Daily Mining Journal, May 23, 1864. CHNC [/footnote] The cavalry, under the direction of Colonel Chivington, behaved much like today’s National Guard and went into rescue mode assisting those trapped by the flood waters, including the Rocky Mountain News owner, William Byers. He and his family were stranded  on an island in the Platte and Chivington dispatched some men to literally build a boat (which was accomplished in two hours) and rescue the family.

At the time, Colorado was experiencing an abnormally wet spring and it had rained incessantly for days prior to the flood. At one point storms produced hail as “large as hen’s eggs” for one full hour. Ranchers had already endured the loss of sheep and cows, however, the likelihood of the dry creek bed suddenly becoming a wet torrent simply did not cross the settlers’ minds.  The sudden flood lead to a loss of property determined to range over one million dollars[footnote]”Great Destruction of Property.” Weekly Commonwealth, May 25, 1864. CHNC [/footnote]. Since the Rocky Mountain News building and all of its equipment were lost in the flood, the Weekly  Commonwealth, in what today would be an impossibly unprecedented gesture, offered to share its office and equipment with the Rocky Mountain News and combine the papers until a new building and equipment was established. [footnote]”Union Ticket.” Weekly Commonwealth, May 25, 1864. CHNC [/footnote]

Amazingly, it took multiple instances of Cherry Creek flooding throughout the decades before the retaining walls were erected in the early 1900’s and the Cherry Creek dam was constructed in 1950.

And so, on this day of May 19, 2016, let us enjoy the fact that the creek is relatively subdued as a nice meandering trickle to be gazed upon while walking/jogging/biking along its trail.