The land that we now call Colorado was sparsely populated by any white settlers in the mid-1800’s. While some had ventured to Colorado to acquire first hand knowledge of what existed in and around the Rocky Mountains (such as Zebulon Pike or Kit Carson), it was primarily the home of Native American tribes, buffalo, pronghorns and prairie dogs. 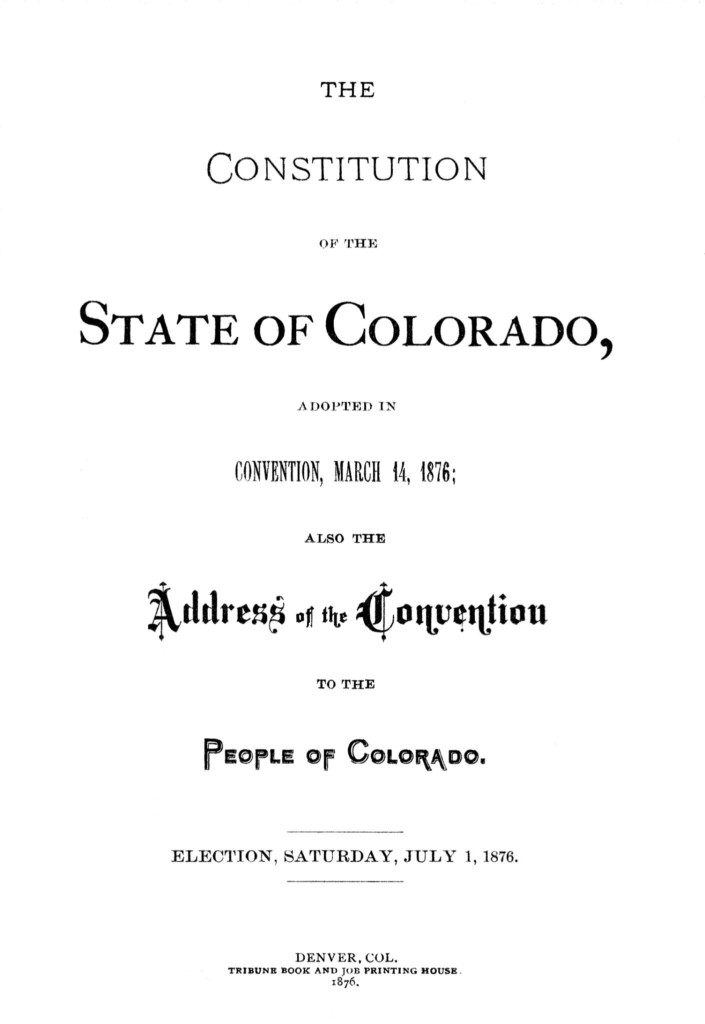 Gold was discovered in 1858 and attempts to keep it a secret failed.  By 1859 the rush of potential prospectors from the east and west culminated in a quick habitation near Cherry Creek, thus establishing Denver City and Auraria.  At the time, this land was considered part of Kansas Territory. By 1861, Colorado Territory had been established by President James Buchanan. Fourteen years later on March 3, 1875, the Enabling Act (a draft of the state’s constitution required by the United States for consideration into the union) was submitted to Congress.[footnote]“The Colorado Enabling Act.” Colorado Chieftain, March 5, 1875. CHNC[/footnote] Proclamation of the statehood was signed by President Ulysses S. Grant on August 1, 1876 and Colorado’s integration into the union increased the number of states to thirty-eight.[footnote]Golden Weekly Globe, August 5, 1876. CHNC[/footnote] 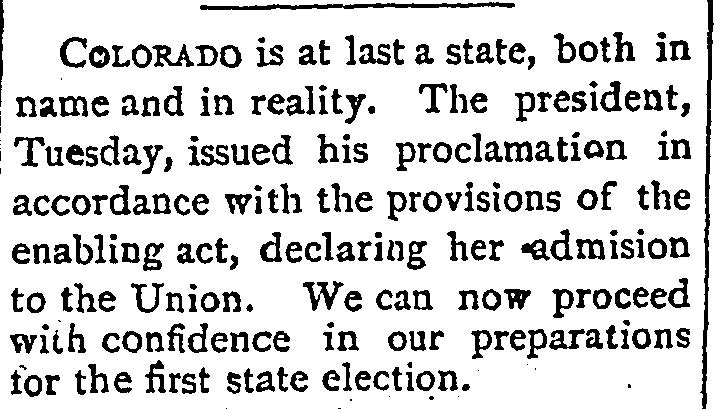 It appears, however, that Coloradans, chose to celebrate before official acceptance of statehood by the United States had been bequeathed. The July 1st election for the adoption of the constitution had passed by July 4th,[footnote]“State Election.” Colorado Transcript, July 5, 1876. CHNC[/footnote] so what better way to celebrate the Centennial Anniversary of the nation than to also celebrate their impending union with America. Therefore, the Fourth of July celebrations in 1876 also included festivities aimed at observing this momentous occasion. In Denver, the parade was extraordinary, complete with grand floats. At the “Grove” (a park type setting within Denver at the time), the territorial Governor, John Routt, gave a rousing welcome and Denver Mayor, R.G. Buckingham read the Declaration of Independence.  A local teacher then gave the history of the area, followed by a poem about Colorado.  Many other speakers followed, waxing eloquent about Colorado and the impending officiality of statehood. [footnote]“The Centennial Fourth.” Colorado Transcript, July 5, 1876. CHNC[/footnote]

Denver however, was not the only city to celebrate. Canon City played a ceremonial game of baseball against South Pueblo (Canon City won). Black Hawk ended up having an unexpectedly destructive good time, when celebratory gunshots hit a tank of quicksilver which promptly exploded, flew through the air and crashed into a boarding house for miners. Amazingly, no one was hurt, but the hotel was left in ruins.[footnote]”The Statehood Celebration of 1876.” Colorado Magazine, July 1951. State Historical Society[/footnote]

When a state enters the union, it must have a leader.  John Long Routt was the territorial governor at the time of induction and assumed the duties of state governor until the election in October.[footnote]Colorado Springs Gazette, August 5, 1876. CHNC[/footnote] He won the election and thus became the first governor of the State of Colorado.[footnote]Colorado Weekly Chieftain, October 26, 1876. CHNC[/footnote]

Colorado has certainly seen its fair share of booms and busts throughout the last 140 years, but people fall in love with this gorgeous state and the population continues to rise dramatically each decade.  In 1880, the population was just under 200,000.  By 2014, there were just over 5.25 million people who called Colorado home. Its appeal has become irresistible.