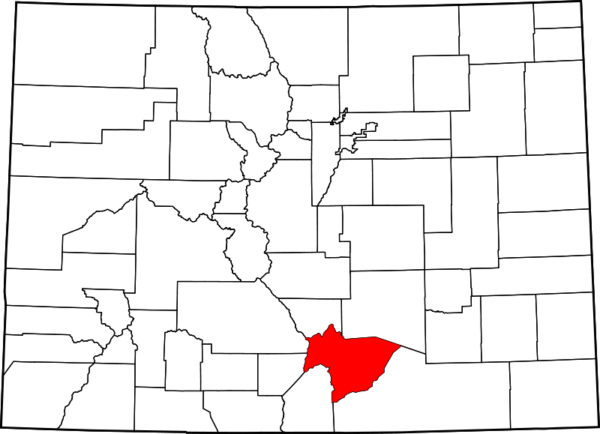 Huerfano County history can now be found in CHNC.  The Walsenburg World, published in Huerfano County from 1889 to 1933, has recently been added to the Colorado Historic Newspapers Collection. The name comes from the Spanish huérfano meaning “orphan”, and the County was named for the Huerfano Butte, a local landmark. Huerfano County was one of the seventeen original counties in 1861 when Colorado became an official territory.  By that time the county already had a long history.

American Indians first settled the area and were later followed by the Spanish and French.  Zebulon Pike and other explorers first came to the region in 1807.  The 1862 Homestead Act brought in a new stream of residents.  The county was a large producer of coal and the population grew because of this.  The coal industry suffered greatly during the coal mine strikes of 1913-1914 and the industry never fully recovered.

Prior to this decline, Walsenburg, with the first major coal mine in the county, became known as the “city built on coal.”  Walsenburg, originally settled as La Plaza de Los Leones, was named after Fred Walsen the town’s first mayor who was elected Colorado’s state treasurer in 1882.  The town was named the county seat in 1872. Three years later, Walsenburg’s first newspapers was published in 1875.

Over ten years later the Walsenburg World published its first issue on March 1, 1889.  Founder G. M. Magill, who also sold real estate and fire insurance, often used the front page of the World to advertise his other business ventures.  The paper had several publishers during its early years.  Wallace C. Hunt and E.F. Halbert bought the paper in 1896.  Hunt later took on more partners, including Jefferson B. Farr, and created the World Publishing Company.

Farr served as sheriff of Walsenburg but was often accused of abusing his powers. Robert Mitchell, editor of the rival newspapers the Walsenburg Independent, took a hard look at Mitchell even gathering incriminating information which he turned over to the U.S. District Attorney in Denver.  Mitchell was murdered shortly after.  His murder was never solved but Farr’s re-election to Sheriff was overturned.

Hunt sold the World in 1928. The paper merged with several other small newspapers in the area.  In 1933, the World merged with the Independent and the two papers became known as the Walsenburg World-Independent.

The Walsenburg World, 1889-1920, is now available to search in CHNC.  Thank you to our partners at Huerfano County Historical Society for making this addition possible.