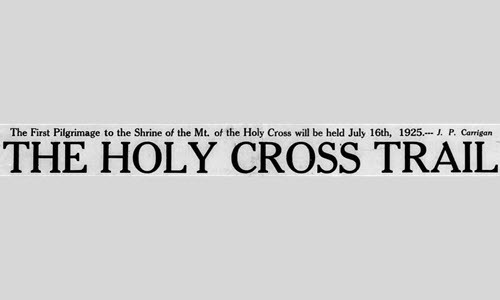 For many Coloradans, climbing a fourteener is a rite of passage.  There are 53 fourteeners in Colorado but only one had a newspaper named after it.  CHNC partner, the Eagle Valley Library District, recently added 913 issues of the Holy Cross Trail, from 1924 to 1941. The Red Cliff paper, published by O. W. Daggett was a source of Red Cliff and Minturn news but also promoted Daggett’s other endeavors or crusades.

This included his devotion to the Mount of the Holy Cross, a Colorado fourteener at 14,005 ft, that was named for the distinctive cross-shaped snowfield on its northeast face. It grew in fame after 1873 when renowned photographer William Henry Jackson climbed the adjacent Notch Mountain and took the first of many photographs of the distinctive cross .  Over the next few decades the Mount of Holy Cross continued to grow in fame as a Christian symbol.

As a result in 1921 the Holy Cross Association, of which Daggett served as publicity manager, was established for the purpose of developing the Holy Cross “Shrine” for religious, educational and recreational purposes.  In the mid-1920’s Dr. O.W. Randall, a dentist from Eagle, and John P. Carrigan, a Catholic priest from Glenwood Springs, conceived of the pilgrimages and worship services to the Shrine.

Daggett’s Holy Cross crusade also had the backing of Denver Post publisher Frederick Bonfils who repeatedly promoted the pilgrimages in the Post. The pilgrimages began to attract thousands of people from all over the world. With this increased popularity, the Mount and the surrounding area received National Monument status on May 11, 1929.  Over the next few years the Forest Service and Civilian Conservation Corps (CCC), who camped on O. W. Randall’s property, made area improvements including new trails, a pilgrim base camp, the Tigiwon Community House, and a viewing shelter, the Notch Mountain Shelter.

The height of visitation was in 1934 when about 3,000 pilgrimages were made to Holy Cross National Monument. Visitation began to steadily decrease and in 1950 its national monument status was revoked. Daggett sold the paper in 1940 and the new owner discontinued it shortly after.  Regardless, today hikers still continue to check the Mount of the Holy Cross off their list of climbed fourteeners and pilgrimages are still made to Notch Mountain viewing site.  Researchers and history buffs can learn more about these historic pilgrimages and Daggett’s other crusades by browsing this exciting new addition to CHNC.