The Colorado Historic Newspapers Collection now includes over 9,500 more pages of the Colorado Transcript! With a shared mission of enhancing access to Golden history the Golden History Museum & Park and the Jefferson County Archives recently partnered together to add the years 1925-1948 to CHNC. 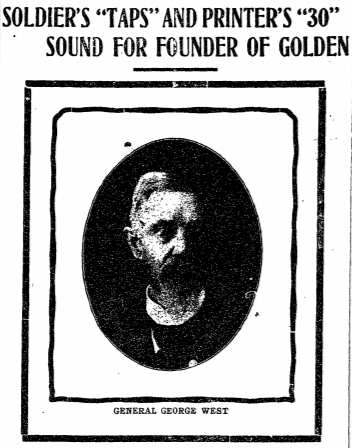 Founder George West published the first issue of the Colorado Transcript on December 19, 1866. At the time, Golden City, as it was known, was serving as capital of the Territory of Colorado.  The Transcript was the third newspaper,  the second for West, to be published in Golden which early on served as a trading center for the mining camps that sprang up around 1858 along the Clear Creek.

West was a leader and well respected in Colorado’s newspaper industry. The Transcript enjoyed immense popularity rivaling that of the Rocky Mountain News.  In 1906, at the age of 80 years, George West died after running the Transcript for nearly 40 years.  After West’s death, ownership of the Transcript passed from one West generation onto the next until 1960 when it passed out of the family.  The paper, whose name changed to the Golden Transcript in 1955 is still published today.

This recent addition to CHNC is just the start of the Museum and Archives’ long term goal of making additional years of this important Golden newspaper available online through CHNC.  Curator Mark Dodge said the Museum is excited  “to contribute to the CHNC. Access to our newspaper collection has remained a museum priority since 2015, when the Golden Library donated their local history collection to the Golden History Museum & Park.  We’re equally grateful for our cost-sharing partnership with the Jefferson County Archive and look forward to digitizing the entire Colorado Transcript in the coming years. It will now be much easier for all to discover the Depression and World War II eras in Jefferson County and Golden.”