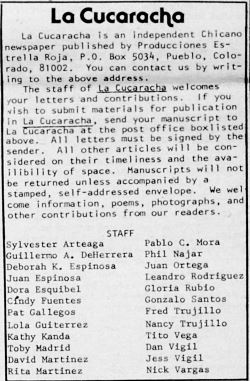 The Colorado Historic Newspapers Collection is pleased to announce the addition of La Cucaracha, a Chicano Community Newspaper.  Over one hundred issues from May 1976 to October 1983 have been added to CHNC courtesy of the Colorado State University-Pueblo’s University Archives and Special Collections.  CSU Pueblo was awarded a SIPA grant (Colorado Statewide Internet Portal Authority) to digitize the original newspapers and microfilm, and community help was used to find many of the missing issues.  The project was recently completed and the issues were added to the already 880,000 pages of historic Colorado newspapers in CHNC.

Published in Pueblo, Colorado, La Cucaracha was started by Juan and Deborah Espinosa and David Martinez, who attended the University of Colorado-Boulder during the early 1970s and were active members of the Chicano Movement.  During their time at UC Boulder, Juan and David worked together on the student newspaper, El Diaro de al Gente. 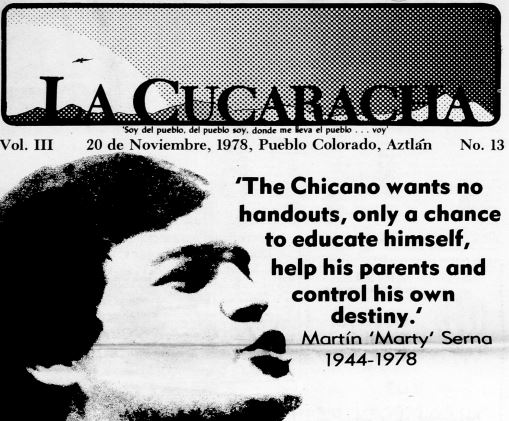 After leaving UC Boulder, Juan, Deborah and David published the first issue of La Cucaracha in May of 1976.  The name, La Cucaracha was influenced by the Mexican corrido (traditional folk song) of the same name that became popular during the Mexican Revolution.  The name was also influenced by the strength and resilience of the Chicano people who have survived and prevailed despite great adversity.  The newspaper reported on many issues and topics including boycotts, land rights cases, police brutality, labor strikes, protests, legal corruption, the effects of discrimination, health care and local and national news.

The Colorado State Library is excited by this recent addition to its CHNC collection.  The State Library’s goal is to continue to add newspapers to CHNC that tell the story of our state’s rich diversity.  We thank our partners like CSU Pueblo, for making this endeavor possible.

Please contact Leigh Jeremias, ljeremias@coloradovirtuallibrary.org, to see how you can add your historic community newspaper to CHNC.