College newspapers occupy a sweet spot in the world of newspapers. The freedom their creators have, unlike most traditional newspapers, means that college papers are sometimes lighthearted or humorous in tone. What is always true is that they are a key insight into the history of a certain time and place. The Colorado Historic Newspapers Collection (CHNC) recently digitized numerous college titles, thanks to participation from Fort Lewis College (FLC) and the University of Northern Colorado (UNC). For this month’s ‘Window to History,’ we’re turning our attention to some of those new additions.

Let’s start with The Crucible, the organ of the State Normal School (now UNC). This newspaper which began in 1892 fits the formal tone of the day, relates the goings on in the school, and is filled with marvelous advertisements. 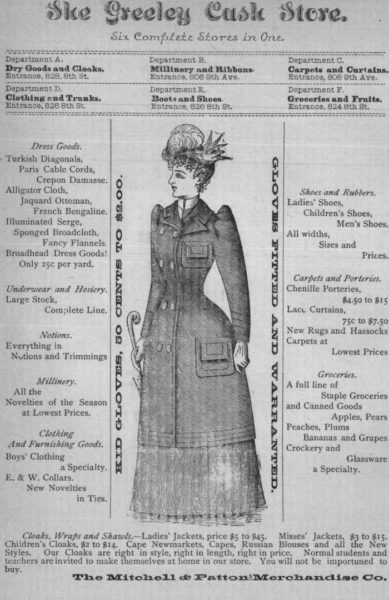 And inspiring quotes from famous thinkers. 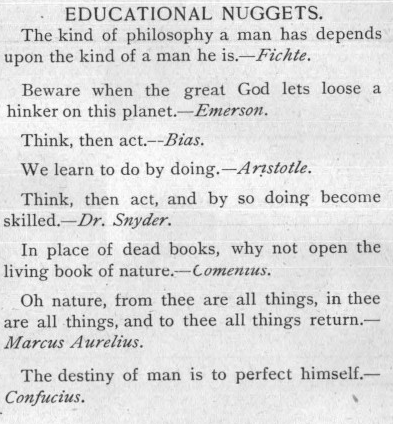 Incidentally, Dr. Snyder was the second President of Normal. It is not unusual for him to be placed alongside such luminaries as Marcus Aurelius and Aristotle. This article which profiles Dr. Snyder, says, “In no other field does President Snyder stand out so prominently as a profound and original thinker, as in the domain of Psychology and History and Philosophy of Pedagogy.”

An Editorial from the very first issue explains the point of the publication:

In this age the newspaper performs the two-fold mission of moulding public sentiment, and broadening the culture of the mass of people. We believe that the subject of Pedagogy should receive the attention of teachers, students, parents and the people in general. So THE CRUCIBLE is sent forth to do its work, with the hope that it will interest each one whom it reaches in the topics discussed, and at the same time afford an opportunity for the students of the Colorado State Normal School to begin at once to actualize themselves.

Not all of this publication is as serious as this lofty editorial. Sometimes, the focus is on good old fashioned fun, as the article, ‘Did We Ever Get Left’ proves:

It becomes our painful duty to relate the story of a trip so pleasant (to the young ladies) and yet so heart-rending (to the young men.) Twenty-one of the young ladies of the Normal, propelled by the desire to have an evening of undivided joy, to show the boys how things might be done, or to paralyze a former Normal boy by stealing a march on him and giving him such a beautiful (that is, we would say beautiful under any other circumstances) surprise as he had never seen before, obtained full possession of a man, a team and a hay wagon and started for La Salle. That is they started after they had relieved the confectioners of their surplus chewing gum and tantalizingly driven around town several times, (we sat on the fence and watched them go by) lacerating the atmosphere with tin horns and some sort of vocal instruments that seemed to be out of tune (some say they were singing but there was no music in it for us.) Well, they left and, sad to relate, we were also left. (We got down off the fence though.) The rest of the story will have to be told as we heard it. Of course we didn’t try to find out about it, but we really couldn’t help it.

Check out the rest of the article for the conclusion to this frolic, which includes an impromptu public sing along and vanishing oysters! I admit, it is all a bit baffling to me, but it sure sounded fun.

If The Crucible’s refined sensibilities don’t capture your imagination, allow me to introduce to you Fort Lewis College’s The Monocle. From around 1927, this publication features charming illustrations and hand-drawn lettering, and the text seems to have been typed out, resulting in quite a few misspellings, giving the paper an endearingly naif and approachable feeling.

Then there is The Beaver, of Fort Lewis School and College. The whole publication is written tongue in cheek, it seems. Much of it is pure wit.

Someone came in and quietly closed the door. He then stepped on the Persian cat printed on the congoleum rug and proceeded to write the following in vindication of what he considered an injustice:

In defense of the mandate which was recently issued that any boy and girl seen together should observe the three-foot limit, which is that they do not approach each other closer than a distance of three feet, I submit the following.

It has been proved by scientists and veterinarians that anyone having halitosis, dandruff, flat feet, or any one of the many varieties of common colds, has a danger zone which may reach to a distance of twelve feet in any direction from the sufferer. Anyone entering within this zone is exposing himself to the malady of the sufferer, and it is only by the religious use of lysol, creosote, or limberger cheese that the layman can safely venture forth into society. An enforcement of the three-foot zone would not only protect the healthy, but it would prevent the diseased from the stigma of knowing that he may have imparted the dread disease of flat feet to some innocent bystander.

Now that the three-foot zone has been established, there are those who glorify in its adoption and feel that it is their solemn duty in life to see that it is enforced. For the benefit of those people we bow in humble submission and refrain from breaking the rule lest they, seeing us without the opportunity to fulfill their duty, shall go down to their grave with the thoughts that they have not fulfilled their mission in life. Out of a consideration for humanity I deem it necessary that the mandate be amended so that anyone who innocently, accidentally, or purposefully violates this rule may be subject to a fine not to exceed fifty cents and imprisonment in the dean’s office not to exceed three hours.

So it is with a light head and the remnants of last week’s beefsteak in my teeth that I issue a call to all the students, laborers, and supporters of the Holy Alliance that they observe the three-foot limit.

Having finished this letter, he opened the door to let out the light which had accumulated from his brilliance while composing the epistle. He then put out the light, shook hands with himself and went to bed.

The college newspaper is also a place of lively debate. Take UNC’s The Mirror as a case in point. The April 4, 1919 edition includes an article (written by an anonymous man) titled ‘C.T.C Girls’

Some of the girls in this institution move about in such an atmosphere of reserve that they ought to be placed on the shelf. They already bear the label. They fairly radiate reserve and conservatism. They never care to recognize you on in [sic] the corridors or the library, and on the street only when they can’t crank the flivver.

(Tidbit: A flivver, I’ve learned, is a “a small cheap usually old automobile.”) What follows is more reproaching and generalizing of “girls,” including this:

According to Montgomery Ward’s book, that one on etiquette, courtship and marriage for all times and all occasions, it plainly says that it is the girl’s place to speak first if she cares to recognize you. So girls get hep.

(Another tidbit: “Girls get hep,” I think means something to the effect of, “Get up to speed with the times, girls.”)

The article seems to prefigure the same strain of anti-women sentiment rampant on the internet to this day. What’s interesting, especially for the time period (granted, this is not the 1700s, but still), is that in the next issue, one Shirley V. Harrison writes an article titled ‘Fifty-Fifty’.

Human nature is much the same, regardless of sex. (This wise remark is inspired by the editorial in last week’s Mirror entitled C. T. C. Girls.) Have you ever noticed that almost invariably it is the person who is reserved, diffident, “stand-offish” who finds others hard to get acquainted with?

The rest of the article is a mini masterclass which deals with the anonymous man’s complaints with true aplomb – and Ms. Harrison wasn’t afraid to sign her work.

Well, that’s just a drop in the bucket of what CHNC has to offer. College papers are a gold mine. Also from Fort Lewis, check out Fort Lewis Collegian, Fort Lewis In-Toto and Smoke Signals. Thanks to our partners who make all of this possible!