“This is truly a perfect palace of a place. Nature and beauty must have here convened and constructed this place in co-partnership. To describe it on my part, would be in actuality detracting from it, for its romance and picturesque sceneries, as it were, beggar all description.”[footnote]Rocky Mountain News Weekly, March 14, 1860. CHNC[/footnote]

The Garden of the Gods, with its unique rock formations, has elicited curiosity and wonderment for centuries.  According to a legend of the Utes, the Native Americans of the area, their ancestors were about to be attacked by giants and they prayed to their god Manitou for protection.  Manitou answered their prayers by turning the giants into stone.[footnote]“The Indians Worshipped There.” Record Journal of Douglas, April 7, 1950. CHNC[/footnote]  For the Utes, it remained a revered place to gather and bury their dead.[footnote]“Old Indian Graves in Garden of Gods.” Record Journal of Douglas, November 27, 1925. CHNC[/footnote]

In 1858, gold was discovered in the Rocky Mountains, which lead to an influx of prospectors making their way West in 1859.  A common route to reach the gold was traversing through the mountains just north of the Garden of the Gods. Miners needed supplies and Colorado City was established to fill that need. In surveying the area just south, two men, M.S. Beach and Rufus Porter meandered into the Garden of the Gods region.  Rumor has it, one exclaimed that it would make a great “beer garden.” The other replied, “Beer garden! Why this is a place fit for the gods to assemble!” And thus it was christened Garden of the Gods.[footnote]“The Garden of the Gods.” Rocky Mountain News, June 13, 1870. CHNC[/footnote]

By 1860, a large portion of the Garden of the Gods was owned by William H. Garvin, Esq. He built a house there and originally intended to “improve” the area with saloons, restaurants, billiards and other recreational structures.  He was also hoping to run a cab line (as in horse and buggies) from Colorado City bringing tourists on an hourly basis to the Garden of the Gods during the summer and fall.  After Garvin’s death in the mid-1870’s, the land was put up for sale, and in 1879, Charles Perkins bought the 480 acres.[footnote]“Garden of the Gods Improvements.” Elbert County Banner, April 15, 1910. CHNC[/footnote]

Garvin and Perkins were not the only individuals who owned parts of the area. Curt Goerke owned the land where Balanced Rock resides. Goerke, a photographer, built a fence around it and if you wished to see the rock formation you had to agree to getting your picture taken by it and pay a quarter for the privilege. However, by 1930 the U.S. Circuit court ruled that Goerke could not charge for visitors to view the rock.[footnote]“Colorado New Notes.” Aspen Daily Times, February 14, 1930. CHNC[/footnote]

Touting of the Garden of the Gods as a hot tourist attraction started almost immediately by Colorado City. The Denver and Rio Grande had it advertised as one of the prime destinations in Colorado that only their railroad went to.[footnote]“Denver and Rio Grande Railway ad” Mountain Mail, October 30, 1880. CHNC[/footnote] Even international visitors wanted to be sure to experience the region. In 1906, the prince of Baroda, India, Maharajah Gaekwar visited the site.[footnote]“Prince’s Visit.” Herald Democrat, June 18, 1906. CHNC[/footnote] As soon as cars were invented, the region gained even more visitors, and the Standard Oil travel guide of 1960 listed it as a place of “special interest” in Colorado for “motorists”.[footnote]“New Travel Guide of Standard Oil Features Steamboat.” Steamboat Pilot, May 26, 1960. CHNC[/footnote]

In 1909, Charles Perkins passed away. While not specified in his will, he did share with his children that he would like his acreage to be donated to the city of Colorado Springs, so that the area 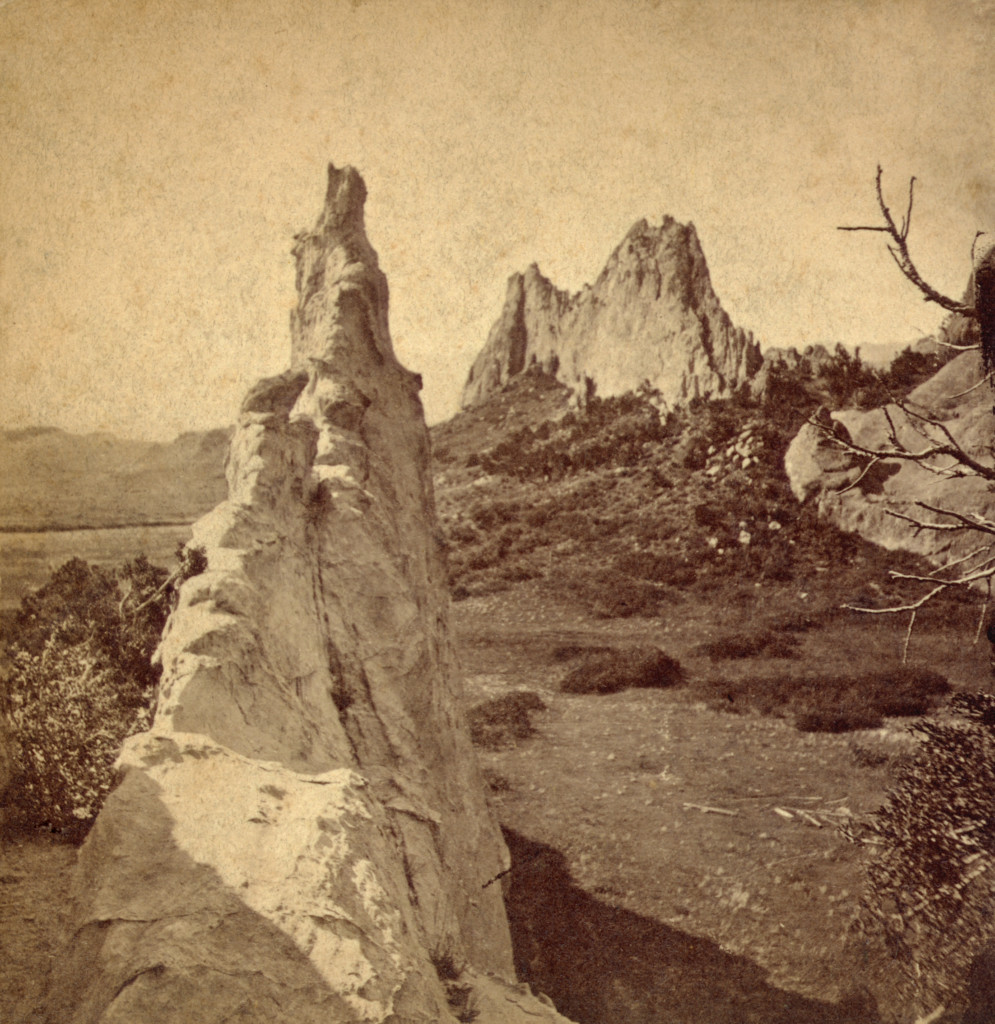 could be used as a park, free of charge. His children upheld his wishes and the acreage became part of Colorado Springs in 1910. Between 1910 and the 1970s the city was able to purchase more of the surrounding land to add to the park, eventually totaling 1,300 acres. They also allowed commercial development, such as an inn built within the cliffs, sightseeing bus routes throughout the park, a chuck-wagon dinner establishment, as well as a beer hall near Gateway Rock.

In the 1930s, the Civilian Conservation Corps worked at the park creating trails, natural stairways and providing benches to decrease the human footprint.  However, by the 1970’s it was becoming increasingly obvious that those measures were not enough and it was decided that all commercial development was to be removed or ceased. Soon after, Lida Hill – who owned property adjacent to the park- offered to build a visitors center on her property and donated it to the city. In May 1995 the visitors center opened. It provided a store, the proceeds of which are used to maintain the park, as well as a parking lot, thus eliminating parking within the confines of the park itself.

The Garden of the Gods park continues to be a major attraction in Colorado with over two million visitors per year. It is still a fabulous place to take photographs, as it has always been; from the amateur photographer winning second prize in a photo contest with his image of the rocks[footnote]Camp Hale Ski-Zette, May 26, 1944. CHNC[/footnote] to the professional photographer, such as the prolific Colorado photographer William Henry Jackson, wishing to profit from its beauty.[footnote]“Scenes in the Rocky Mountains.”Silverton Standard, November 29, 1890. CHNC[/footnote]  Easily accessible with paved trails and astounding views, it is no wonder why the Garden of the Gods is so popular.